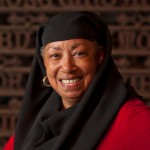 Being here as long as I have, it is impossible not to marvel at the way the center has expanded - in terms of people and space.

As the center has grown over the years, so has Safia's position. What began as purely administrative responsibilities, gradually began to include finance. In 1996, Safia became PIC's Account Manager where she works with families regarding tuition payments and with outside vendors. She also manages employee payroll.

Safia lives in East Mt. Airy with her husband. She has one daughter and two granddaughters. Both of her grandchildren are proud PIC alumni.